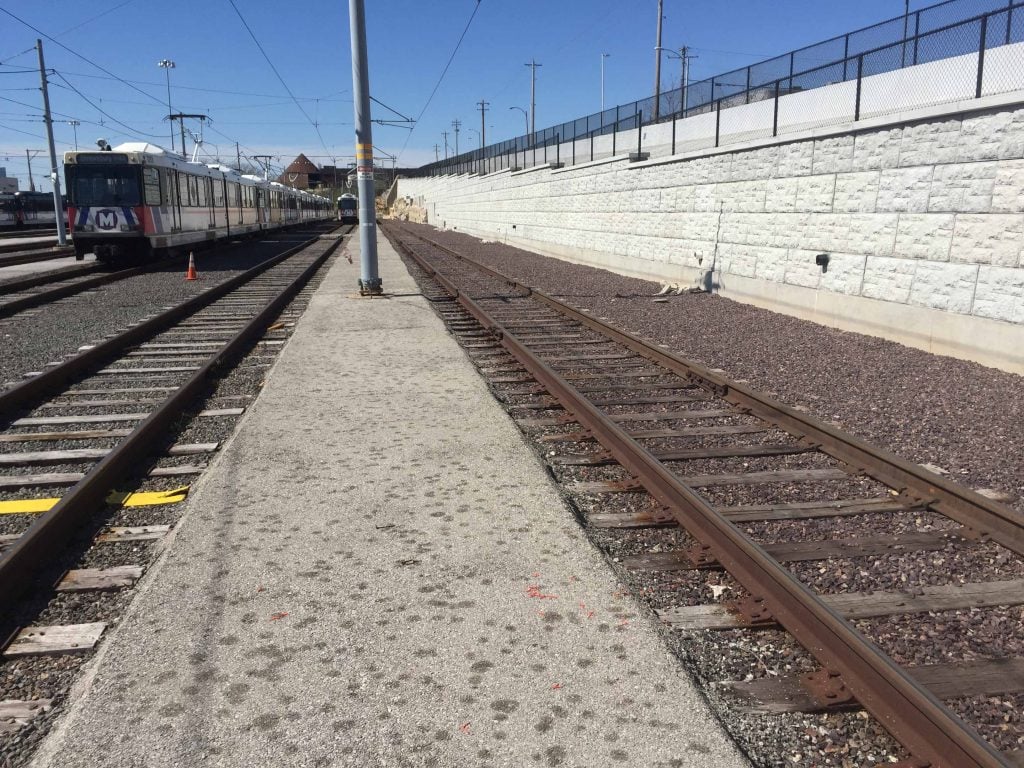 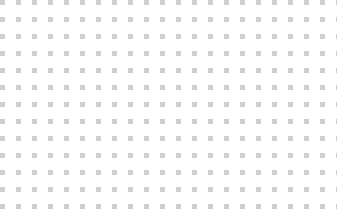 Up for the Challenge

A difficult installation footprint along a light rail line proves to be no problem for Cornerstone Wall Solutions’ functional MagnumStone retaining wall system.

The St. Louis MetroLink serves as a lifeline for commuters and visitors alike, with routes extending through downtown to the city’s international airport, near Washington University, and out to Scott Air Force Base near Shiloh, IL. One of the busiest light rail lines in the Midwest, MetroLink carries more than 53,000 passengers daily along its two lines from 38 metro stations.

It is a vital component of the St. Louis transportation infrastructure. That’s why in 2016, when it came time to shore up a failed wall at the terminus of the line, MetroLink’s operators wanted to make sure they chose a long-lasting, robust replacement. The MagnumStone big block hollow core retaining wall system developed by Cornerstone Wall Solutions (cornerstonewallsolutions.com) provided the perfect fit.

The MagnumStone system’s unique features met the variety of challenges posed by the MetroLink project, including a tight footprint, existing utilities and a portion of the original foundation wall that the new wall needed to mesh with. MetroLink’s operators, the Bi-state Development Agency, knew what they wanted, and they stayed heavily involved in the high-profile project.

“They had pretty strict requirements. They were pretty particular about the aesthetics of it,” said the wall’s designer, Greg Linneman, structural engineer and principal at Crockett Engineering Consultants. “It was scrutinized because I think there was a wall that had failed there before. They wanted to make sure they don’t have problems in the future.”

Steve Schrimpf, the installer and owner of Schrimpf Landscaping Inc., said the failed wall was from the remains of a large factory that had been demolished at the site, located near Busch Stadium, home of the St. Louis Cardinals, in the heart of downtown. MetroLink developed the site as a terminus to store its trains at night. At some point, the old factory wall, which dated to the late 1800s, collapsed.

“They have 12 sets of tracks where they store their 12 trains, and when the wall fell over, it fell on four of them,” Schrimpf said.

The contractor hired Schrimpf’s company to replace the foundation wall, squeeze it into tight quarters, and marry it to the remaining stable sections of the existing foundation wall. Schrimpf preferred MagnumStone for the design-build project due to its ability to reach up to the 16 ½ foot maximum height at the site while only needing a 10-foot wide excavation at its deepest point.

MagnumStone’s hollow core design and proprietary extender system provided the flexibility needed at the site, according to Jeremy Winegar, vice president of sales at Midwest Block and Brick, which supplied about 8,000 square feet (745 square meters) of MagnumStone for the project.

“There was a street above the top of the wall as well as a rail yard down below,” Winegar said. “It was a very tight job sight as far as the installation, including the utilities and the traffic both above and below.”

The project owners and the design team needed to work through the site details to determine which wall system would work best, Winegar said. “There were several weeks that went into the design and the layout, but finding a product that could be set and installed in a constrained space – maximizing the amount of square footage and efficiency while they were setting – was the main reason this product was selected,” he added.

“Plus having the hollow core – the ability to drain the water to the face of the wall and then pipe it down through those hollow cores – was also an advantage on this project,” Winegar added. “When you’re in a paved environment, you don’t have soils to soak up water runoff, so the ability to divert whatever we could into piping that went through the hollow chambers was an advantage.”

As big block retaining wall systems started to emerge years ago, Midwest Block and Brick took a serious look at which system would be best for its operation, which spans much of the Midwest and portions of the Southwest and Southern United States. As one of the largest concrete hardscape and masonry companies in North America, efficiently manufacturing and shipping a large volume of blocks was a major concern.

MagnumStone features a hollow core design with an 8-square-foot face (0.74 square meter) and a tongue-and-groove extender system attaching to the back that accepts the fill and creates a true gravity retaining wall. The hollow core design means it weighs significantly less, which provides big benefits in terms of manufacturing, shipping and installation.

“We were staring at several different big block systems trying to make a decision as to what the best one was going to be for us,” Winegar said. “Our wetcast facility is located central in our footprint and a lot of these wall systems are large heavy units. Freight is a major component in the cost,” he said, and the hollow core design, which weighs about 40% less and uses about 40% less cement and concrete, provided savings all around.

For the MetroLink project, there was not enough excavation space for a geogrid wall, and there were utilities to work around and the remaining foundation wall that the new wall needed to line up with. The relatively compact nature of MagnumStone’s footprint and the flexibility provided by the extender system made it possible to build around, and even through, existing utilities.

The connections provided by the extenders made the difference for the installers, Schrimpf said. “You had to have a positive connection-type system,” he added. “That’s another thing I like about MagnumStone’s connection. Your reinforcement is taut when you put it on. Whereas with a grid, you can’t pull a grid tight enough. It’s going to stretch. It might only stretch a quarter inch or half inch, but over time that wall is going to settle and move. I’m not real fond of that. We go to great lengths to get a wall plumb and set it in place and looking great, and when we leave, I don’t like it to move. So, I’m very fond of the MagnumStone system with the positive connection legs.”

With a utility pole right in line with the wall, Schrimpf’s team was able to install the face panel in front of the pole and between the extenders, saving additional time and money that would have come from a relocation of the pole. The lighter weight and two-piece design made it possible for the installers to use smaller equipment, a further benefit in such a tight location.

The extender system is a key feature that separates MagnumStone from its competitors. The system features 2-foot (0.61 meters) and 4-foot extenders (1.2 meters). The design enables the extenders to be chained together to create longer lengths for taller walls. Because the extenders are separate from the face of the wall, they are poured on a different set of forms, which means a producer can stockpile standard pieces and make the face pieces as needed, which creates a more efficient production environment.

Doug Statler, a sales consultant for York Building Products, headquartered in York, Pa., has been selling MagnumStone since 2008, when Cornerstone Wall Solutions introduced the current two-piece face/extender system in North America. The extender system provides flexibility and efficiencies that makes MagnumStone stand out in the large block wall niche.

“With the concrete extenders you can increase or decrease the wall depth in 2-foot (0.61 meter) increments,” Statler said, “so you’re not limited to a small, medium and large block. With other systems – once they get to their large block, they’re done. They have to pour concrete in the field to extend the depth of it. With MagnumStone, we can go from 2 to 4 to 6 to 8 to 10 to 12 feet. We can do any depth infinitely in 2-foot (0.61 meter) increments. We can easily increase the depth in 2-foot increments, and conversely we can decrease the depth of the wall as you get higher up in the wall.”

Contractors love that kind of flexibility, given the “unknowns” that often occur when installation starts on a project. The fact that the system is all-inclusive is also a big plus.

“I talked to a contractor earlier this week,” Statler said, “and he said, ‘so you guys can ship me the concrete and I just place it, whereas with other systems I have to get a ready-mix truck and pour it to extend the depth.’”

It’s a total precast solution. “The extenders are precast at the plant and shipped on the truck,” Statler said, “so they can be set immediately to extend the wall. Nothing is needed on the spot, versus stopping construction, pouring ready-mix, waiting for it to cure and all that mess.”

Greg Linneman, who has designed hundreds of retaining wall systems at Crockett Engineering Consultants, said that aesthetics and longevity were two major requirements for the St. Louis MetroLink.

Durability is a big thing,” Linneman said, adding that the Missouri Department of Transportation and many other DOTs are now specifying MagnumStone-type systems. “There aren’t many small blocks being installed anymore,” he said. “It’s mostly these bigger block systems that are cast – just because of the durability.”

That’s especially true where MetroLink is concerned, Schrimpf said. “They have a lot of wall along their tracks, and a lot of it is smaller modular (blocks), and they’ve had a lot of issues because of the vibration of the trains.” The MagnumStone wall “looks fantastic, and it hasn’t moved a bit,” Schrimpf said.

In replacing the 100-plus-year-old foundation wall, MagnumStone provides a sleek, modern look for the MetroLink terminus. The project owners want it to look good for a long time, Linneman said. “Basically they don’t want to have to touch this thing for the next 50 years.”

With the MagnumStone system holding strong and looking pretty, it’s a good bet that the 50-year requirement will stand the test of time. 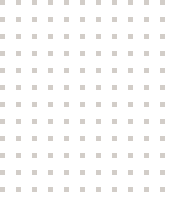 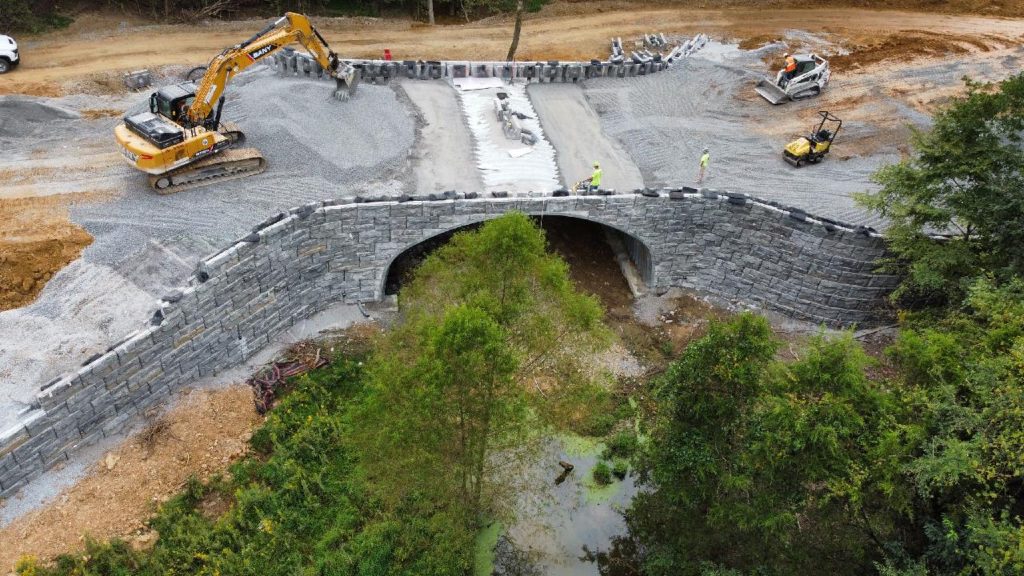 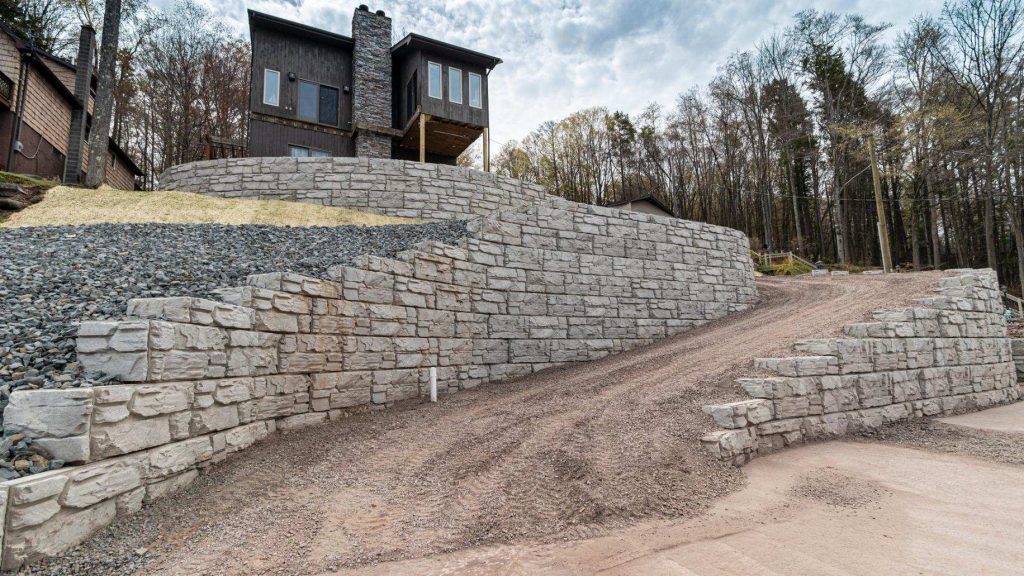 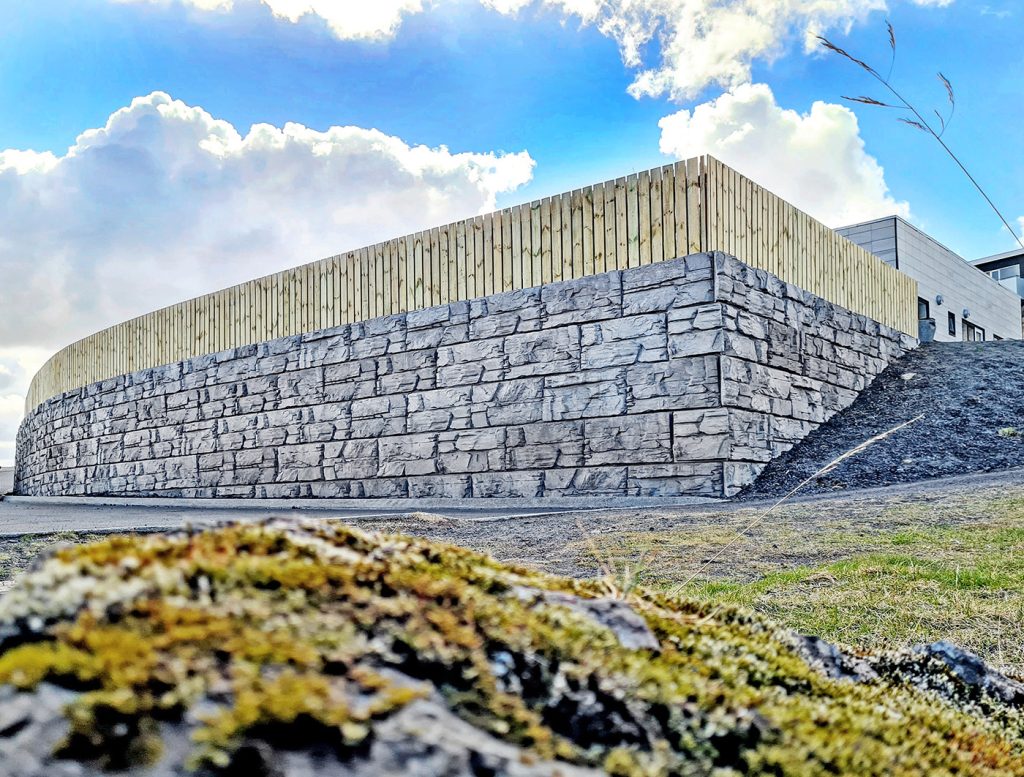 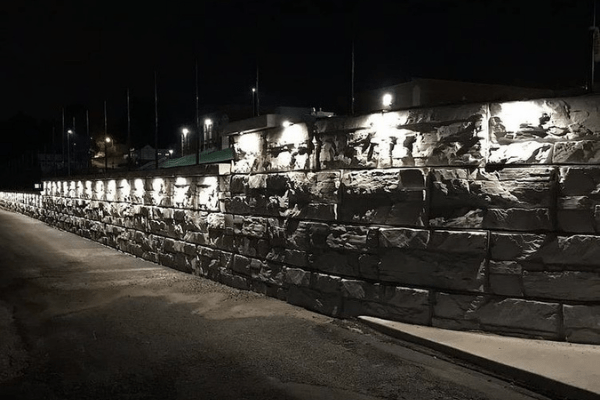 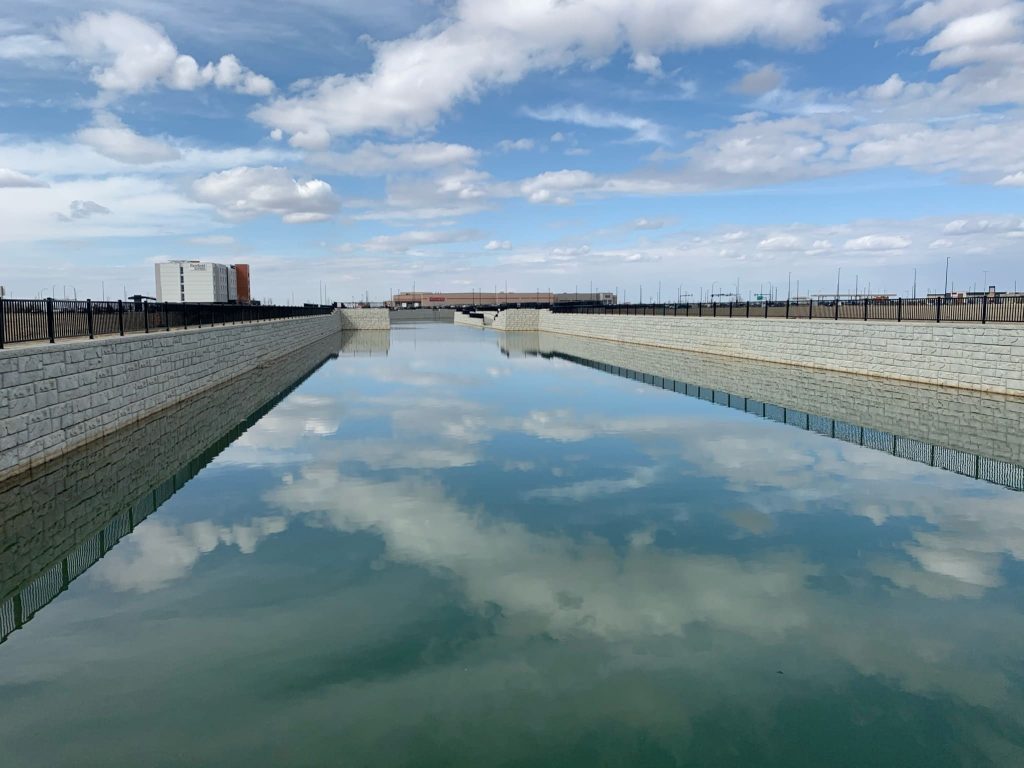 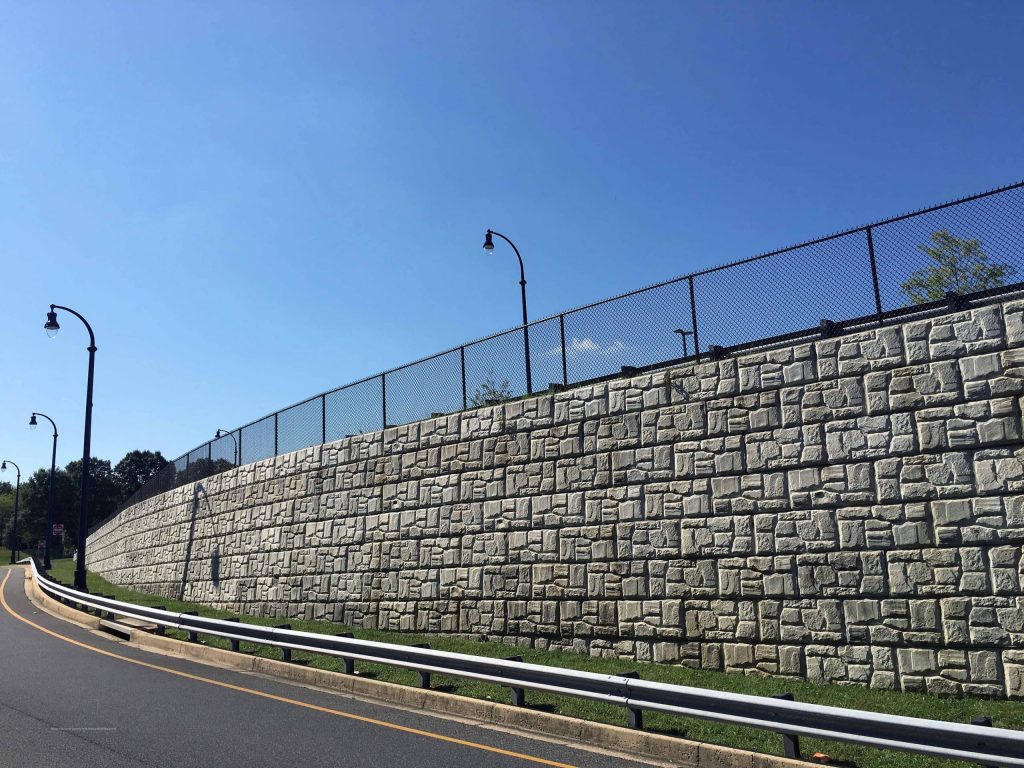 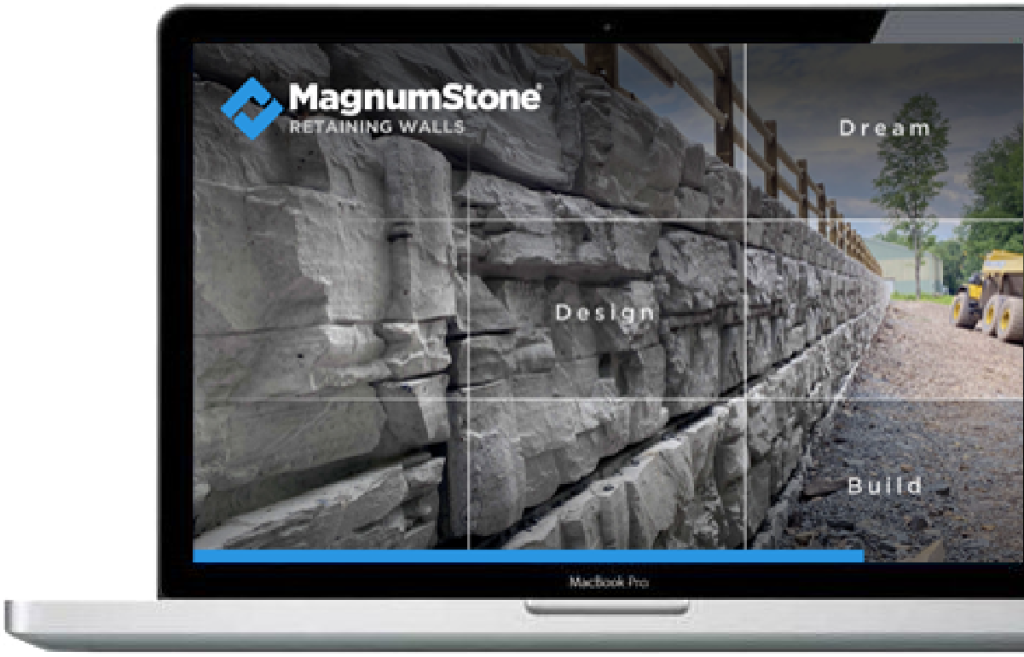