Few places on earth see and feel Mother Nature’s powerful strength quite like coastal ocean frontage. Living along the Atlantic is no different, with hundreds of islands dotting North America’s rugged eastern shoreline. These islands help to absorb violent weather and fluctuating tides while paying the ultimate price of erosion and land deterioration.

However, there are rare cases that these islands are given a second chance to thrive thanks to complex restorative efforts and creatively engineered solutions. MagnumStone is proud to now be part of the solution and historic story of Poplar Island, becoming a contributor to its ecological legacy.

The Rise and Fall of Poplar Island

Slightly protected by the Delmarva Peninsula stands Poplar Island, along the eastern seaboard in Maryland’s renowned Chesapeake Bay. The island’s rich history of hosting British warships during the War of 1812 and serving as a retreat for vacationing United States presidents in the 1930s and 1940s had since become known for its quickly eroding land mass. Surveyed at over 1,100 acres (4.45 sq. km) in 1847, the island had whittled away to as little as 4 acres (0.016 sq. km) by the 1990s. Its prominent footprint in Chesapeake Bay was washing away into critical Atlantic shipping lanes at an alarming rate, along with the natural wildlife habitats it provided. To combat these key issues, a decision was promptly made to restore Poplar Island’s land mass by using dredging materials from the shipping channels of the Chesapeake Bay and Port of Baltimore. The plan was actioned by the U.S. Army Corps of Engineers (USACE) and Maryland Department of Transportation Maryland Port Administration (MDOT MPA) to ensure the dredged materials were used beneficially, as declared by the Maryland General Assembly.

The dredging and sediment relocation to Poplar Island began in 2001 and was used to construct marvelously engineered marshes and wetlands which now serve as important wildlife habitats for osprey, waterfowl and shorebirds. The size of the original project plan was 1,140 acres (4.61 sq. km). In 2007, an expansion of 575 acres (2.33 sq. km) was also approved, with its construction getting underway in 2016. The island now proudly boasts over 35,000ft (10,668m) of containment dikes made from sand, rock and stone.

All Aboard: Collaborative Wall Design

For the most recent construction project on Poplar Island in 2020, namely Spillway 17 and Spillway 19, the USACE specified a big block gravity wall system in their plans and bid documents. These two spillways are located along a vital area of Poplar Island where large culverts and road access overhead are required. Four big block gravity walls were needed to support the roadways above the two culverts at these spillways, one on either side of each culvert. During the engineering phase, the project faced extensive challenges which had to be overcome while adhering to the stringent USACE project requirements. Earth Retention Systems’ designs had to account for tidal water elevation fluctuations and global stability. Other major factors included scour and soft underlying soils which can cause bearing capacity issues. USACE’s guiding principles center on environmental sustainability and ERS’ exceptional team designed the perfect solution to meet Poplar Island’s needs. A strong retaining wall system was essential to this zone’s success.

This stand-out feature was a significant differentiator because all of the blocks for Spillways 17 and 19 retaining walls had to be shipped to Poplar Island by barge, along with the crew, construction equipment and other materials. With 40% less concrete, MagnumStone could easily be transported by flatbed truck – in less trips, which reduced CO2 emissions – to a port in Galesville, MD, on the western shore of Chesapeake Bay.

From port, MagnumStone’s lightweight design meant the barge could efficiently load more square footage of blocks and optimize crossings to and from Poplar Island. Additionally, throughout the construction phase, installers McLean Contracting Co. could use smaller eco-friendly equipment because moving MagnumStone’s blocks did not require large machinery.

The light-colored MagnumStone blocks also blended in perfectly with the spillways’ concrete culverts for a natural, unified look. In prior phases of the Poplar Island expansion, the USACE utilized HDPE corrugated pipe spillways for water and marine life to pass through. In an interesting development, the team realized that crabs, fish and turtles were wary to travel through the corrugated pipes; this was attributed to their dark color and ribbed texture. To alleviate the issue in future phases including Spillways 17 and 19, smooth light-colored concrete culverts were installed – much to the delight of marine life visiting Poplar Island. For Poplar Island, ERS had to account for the Atlantic Ocean’s shifting tides, which in turn meant their top priority was the durability of the retaining walls. The advantage to York Building Product’s precast MagnumStone manufacturing is their production facility yields higher quality concrete thanks to controlled, structured processes. This wet cast concrete’s quality directly contributed to increased strength and is proven to hold up better when faced with salinity and saltwater applications.

Each retaining wall on site used GT142 Non-Woven Geotextile Fabric by SKAPS Industries for soil and sediment retention, an excellent filter fabric for separation and drainage applications that this project would encounter. Large boulders (referred to as riprap) strategically line the base of the MagnumStone retaining walls for added protection and security against nature’s most severe weather.

Poplar Island is now home to four MagnumStone gravity retaining wall systems, two for each of Spillways 17 and 19. The walls peak at seven courses, a height of 14ft (4.26m) with an average water level of 5ft (1.5m). To solidify and stabilize such a tall wall structure, two 4ft MagnumStone extenders were attached to the standard MagnumStone blocks to help minimize the need for any future wall maintenance or repairs. Long-lasting strength and durability are key elements for any waterfront retaining wall. That is why MagnumStone’s eco-friendly versatility offers solutions worldwide for any water application, from culverts and shorelines to Poplar Island’s ocean frontage. 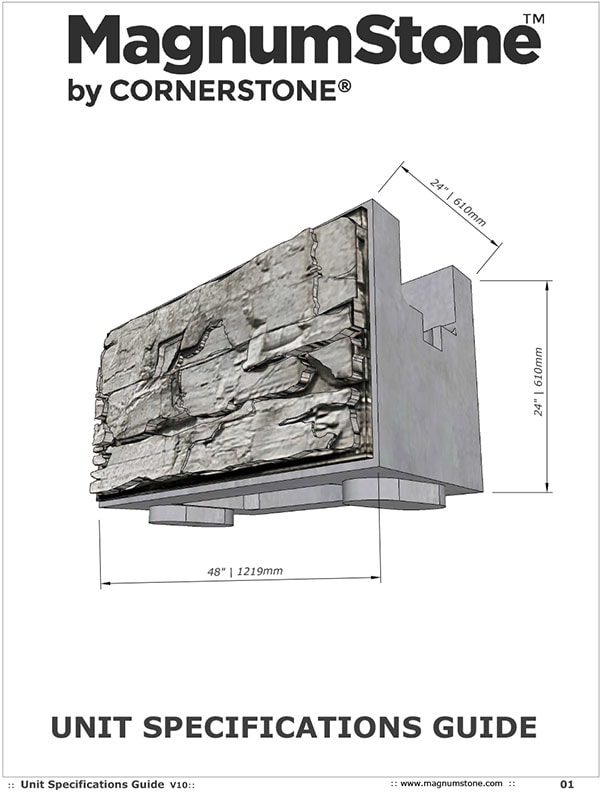